The Blue Barn is a mysterious place that seems to keep popping up. It first appears as a portrait. It later appears on The Drawing that Wilfred discovers. A strange symbol is behind the barn on the drawing, which Ryan later discovers. It appears in full in Amends, where Wilfred pushes Ryan off the top floor down to three evil version of Wilfred, before Ryan wakes up. Ryan meets Charles, the leader of The Flock Of The Grey Shepherd, here in the series finale.

As seen in the Season 2 premiere, Progress

The Drawing seen in Secrets 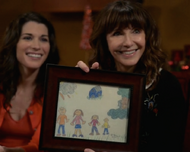 Happiness (Series Finale)
Add a photo to this gallery
Edit

Retrieved from "https://wilfred.fandom.com/wiki/Blue_Barn?oldid=6646"
Community content is available under CC-BY-SA unless otherwise noted.